To global overview
More in the BTI Atlas 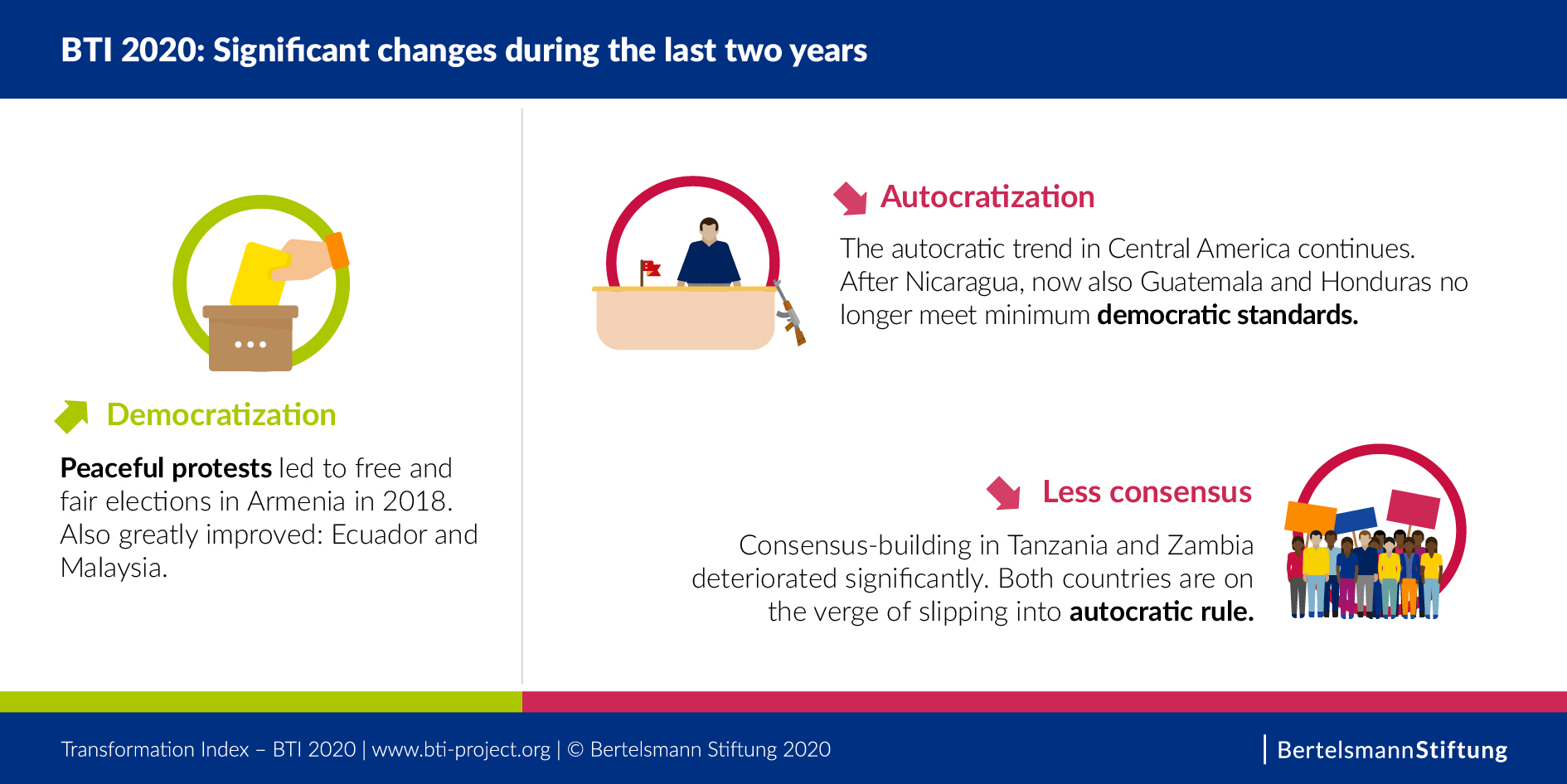 The quality of democracy, market economy and governance in developing and transformation countries has fallen to its lowest level in 14 years. The Bertelsmann Stiftung’s Transformation Index (BTI) shows that democratic regression, rampant corruption and deepening polarization are interlinked and mutually reinforcing each other in many of the 137 states surveyed.

The BTI 2020 findings record a growing number of countries that are subject to distorted political and economic competition. Government leaders and their associated economic elites are leveraging their positions and privileges to consolidate their power and line their pockets. And while we’ve always observed this form of patronage-based rule in autocracies, it is increasingly also a feature of democratically elected governments. As a result, we see growing numbers of people being excluded from the political process as the rule of law is hollowed out and opportunities for political participation are curtailed. We also see more people being excluded from economic participation and being subjected to unfair competition and growing social inequality. At the same time, consensus-building and other aspects of governance designed to balance interests are losing ground. Ethnic, religious or regional divisions are often instrumentalized and deepened, which has generated more societal polarization worldwide over the last decade.

Most governments have no response to the most urgent issue in economic transformation: the socioeconomic marginalization of broad segments of the population. In 76 of the 137 BTI countries, including 46 out of 50 African countries, poverty and inequality are widespread. The global average score for the level of socioeconomic development, which had already sunk to 4.46 points in the BTI 2010, has continued to decline, reaching a new low of 4.28 points in this year’s BTI. Halting the spread of social inequality, which is driven in part by globalization, is difficult even for those few governments that take a proactive approach to social policy.

Economic performance over the last decade has also been largely negative. Macroeconomic indicators deteriorated in 61 of the 128 BTI countries surveyed since 2010, and stagnated in another 35. As a result, fiscal stability suffered. While the BTI 2010 reported that 38% of all surveyed countries featured stable fiscal policies, this share fell to 20% in this year’s edition. Several countries are burdened by debt levels not seen since the 1980s.

And while externally induced shocks certainly play a role here, the nepotism and mismanagement characterizing many governments exposes the responsibility they bear for the lack of progress. If one distinguishes market-economic systems from dirigiste, market-distorting or patronage-based structures, only 15 of 137 governments guarantee free and fair competition, while another 14 do so only halfheartedly. Economic systems in more than 100 BTI countries are only marginally market-economic in nature, if at all. In fact, while 70% of all economic systems surveyed by the BTI feature adequate conditions for a functioning private sector, they are also characterized by severe regulatory deficits, particularly with regard to anti-monopoly policy.

Economic and social fairness therefore demand considerably more attention. The discrimination and concentration of power we see in many countries is driven by social exclusion as well as deficits in market organization and competition.

Quality of democracy is eroding

Political competition is also increasingly subject to restrictions. Authoritarian modes of governing have steadily increased over the past 10 years. A number of autocracies have intensified their repressive tactics, while several democracies – many of which were once classified as consolidated – have tampered with basic political participation rights and the rule of law. Despite a few developments to the contrary, the BTI 2020 registers a continuation of the global trend of eroding democratic quality.

Citizens around the world are increasingly frustrated by these developments. This can be seen in the alarming decline in the approval of democracy, which has fallen 0.79 points (on a scale of 10) since the BTI 2010. Although clear majorities in most societies continue to favor a democratic regime, they are nonetheless dissatisfied with how democracy works and distrust their institutions and politicians.

In many countries, rampant corruption and the systemic abuse of office are key factors in the lack of trust in the political class. The opposition and civil society are particularly outraged by partisan attempts to prosecute the abuse of office (Brazil) or to get in the way of such efforts (Romania). According to the BTI, only 12 countries – including Singapore, as the only autocracy – are equipped with effective mechanisms for prosecuting office abuse.

In some countries, this crisis of confidence is fueling populist protest and helping usher in governments ostensibly committed to the fight against “corrupt elites.” But these governments, such as those of Hungary and Turkey, instead tend to create new patronage-based networks. They see their mandate – through the lens of anti-pluralism – as a revolution at the ballot box that has given them the task of implementing the “will of the people,” as defined in their terms. They then proceed to amass power within the executive by tightening control over the judiciary, by restricting freedom of the press and the right to assemble, and by manipulating elections. Traditional elites in defective democracies as well as autocratic rulers seeking to refine their repressive strategies make use of a similar set of instruments in their efforts to secure power. This is reflected in the fact that during the last two years, the overall score for political transformation has deteriorated by at least 0.25 points in nearly one in five BTI countries (i.e., 24 of the 129 already included in the BTI 2018).

As economic exclusion and political polarization grow, many governments are struggling to build a consensus on reforms. But there are also several leaders in power who are actively fomenting tensions in society. On global average, all five BTI indicators of consensus-building – and conflict management, in particular – deteriorated during the period under review. Political leaders’ waning efforts to reconcile diverging interests and de-escalate conflicts have deepened political divisions in 29 countries over the last two years, particularly in Nicaragua.

The trend toward autocratic behavior is also taking its toll on international cooperation efforts. Struggles over regional influence and illiberal alliances have significantly compromised cooperation with international organizations as well as within bilateral and multilateral frameworks in the Balkans, Central America, Eastern Europe and the Middle East. Scores for the willingness to engage in regional cooperation, which have traditionally been rather high, are plummeting.

Contrary to the claims of autocrats and populists, a concentration of power in the executive branch does not improve governance. This fact is most notably evident in the ability of governments to draw on their own experience and external input when making decisions. Nearly one-fourth of all governments surveyed – in particular, defective democracies and those governments recently classified as autocracies – have shown less willingness to engage in policy learning over the last two years. The example of Turkey demonstrates how a political system that is increasingly tailored to the whims of a leading figure robs itself of critical discourse, of alternative ideas and, ultimately, of innovation and flexibility.

On a positive note, however, progress has been made in the area of anti-corruption policy. In Armenia, Ecuador, Ethiopia, Malaysia and South Africa, newly elected heads of government have identified the fight against corruption as a priority and have delivered initial successes. Malaysia and South Africa’s scores on this indicator have improved to seven points, making them part of a relatively small group of 23 transformation countries that represent good performers in this regard. But this also means that well over 100 countries are far from succeeding in the battle against corruption. Among all BTI governance indicators, that of anti-corruption policy continues to record the lowest scores.

Ongoing protests against the abuse of power

As the BTI 2020 shows, we see pseudo-participation in several democracies and the simulation of competition in many market economies, both of which are leading to increasingly centralized control in the executive and greater social inequality. However, there are promising developments recorded in Armenia, Ecuador and Ethiopia. In addition, prolonged protests in Algeria and Sudan brought down long-ruling presidents and raised hopes of broader political change after the end of the period under review. Autocrats may have refined their means of maintaining their rule, but civil societies are also showing a learning curve. It’s worth noting that demonstrators in the aforementioned countries have not been satisfied with the mere removal of heads of state and have shown resolve in their demands for genuine change.

As the BTI 2020 shows, we see pseudo-participation in several democracies and the simulation of competition in many market economies, both of which are leading to increasingly centralized control in the executive and greater social inequality. However, there are promising developments recorded in Armenia, Ecuador and Ethiopia. In addition, prolonged protests in Algeria and Sudan brought down long-ruling presidents and raised hopes of broader political change after the end of the period under review. Autocrats may have refined their means of maintaining their rule, but civil societies are also showing a learning curve. It’s worth noting that demonstrators in the aforementioned countries have not been satisfied with the mere removal of heads of state and have shown resolve in their demands for genuine change.